YOUR FUTURE IN A CUP OF COFFEE

Drinking Turkish coffee is a centuries-old ritual, enjoyed best in company and sometimes followed by some fortune telling.
As the poet says,
"Not the coffee, nor the coffeehouse is the longing of the soul
A friend is what the soul longs for, coffee is just the excuse".
Turkish coffee differs from percolator and instant varieties, in terms of the way it is grinded and served. Coffee beans are roasted a few times and then grinded very fine. Turkish coffee is prepared in tiny pots called cezve, which can be used to make two cups of coffee at each shot. For perfect coffee, first put two cups of water in the cezve, and then add two spoons of Turkish coffee. When the coffee starts to boil, a thin layer of foam will appear on the surface of the liquid. Using a spoon, distribute this foam among the cups. Then boil the coffee in the cezve until it foams up again, and break it among the cups. This boiling action gives it its unique taste. Traditionally, each cup of coffee should be served along with a glass of water. Sugar may be added to taste into the cezve right before the cooking stage. One will be asked to specify the amount of sugar when ordering, sweet, sekerli, medium sweet, orta sekerli, and plain, sade.
Yet, the most distinguishing feature of Turkish coffee is neither the way it is grinded nor the way it is boiled. Turkish coffee is unique because it allows your fortune to be told by looking at the cup. This custom of coffee cup reading is at least as old as Turkish coffee itself, and it is repeated with each and every cup consumed. While this can be done casually among friends, it is also possible to consult professionals. So how a coffee cup is read, how can shapes trapped in a tiny cup reveal the future?
Firstly, the coffee should be drunk only from one side of the cup. When the coffee is finished, the saucer is placed on top of the cup, and a wish is made. With the saucer still covering the top, the cup is held at chest level and turned counter-clockwise a few times. Following this, the cup is turned upside down onto the saucer, and left to cool. Sometimes a coin may be placed on top to make the cup cool faster and to dispel bad omens that could be read from it. When the coffee cup is cool enough, someone other that the person who drunk the coffee opens the cup, and starts interpreting the shapes for divination. 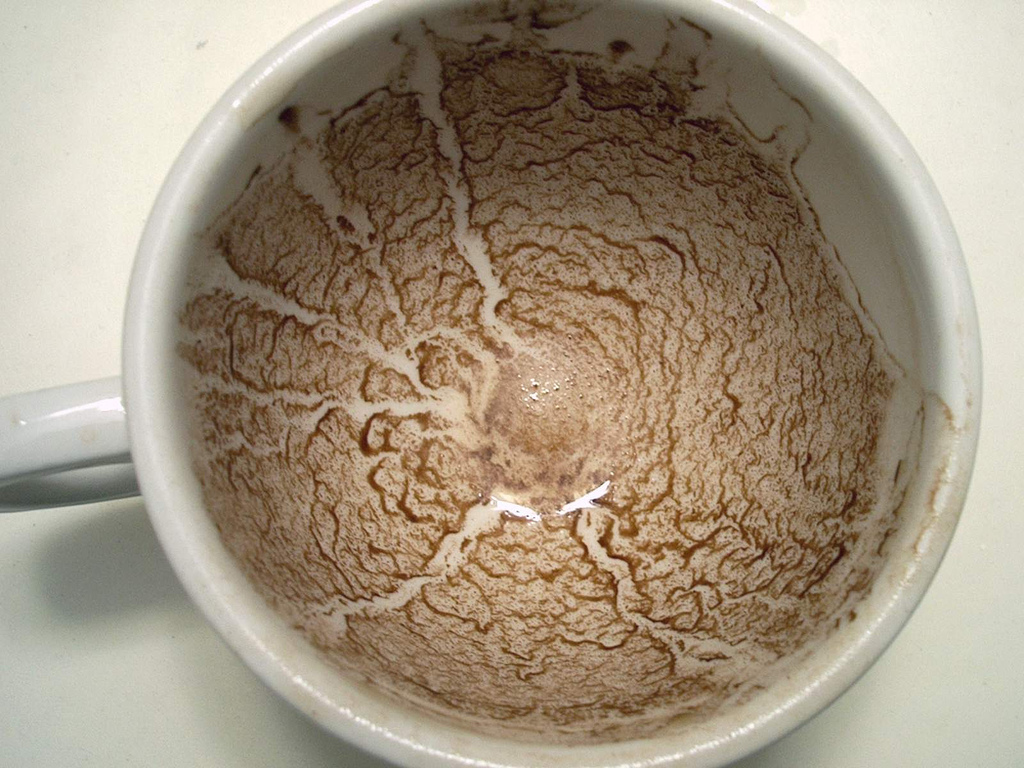 Coffee cup reading is a widespread and popular fortune telling method, which speaks of both the past and the future. For divination purposes, the coffee cup is considered in two horizontal halves. The shapes in the lower half talk of the past, whereas shapes in the top half talk of the future. The shapes that feature on the right side are usually interpreted positively, while shapes on the left are interpreted as signs of bad events, enemies, illnesses, troubles, and the like. According to another belief, the coffee cup can tell the past but it can only foretell forty days into the future. Hence the practice of coffee cup reading cannot interpret the future that lies beyond forty days.
In addition, if, at the reading stage, the cup and the saucer are firmly stuck, and the person is having trouble separating them, it is believed that this particular cup should not be read. This is a case of “prophet’s fortune telling,” where it is assumed that the person who has drunk from the cup is lucky, and does not need to have their fortune read. Similarly if a large chunk of coffee grounds should fall to the saucer as the cup is being separated, the interpretation is that the owner of the cup will soon be rid of all troubles and sadness. According to another standard interpretation, if coffee drips onto the saucer as the cup is opened, the person who drunk is to soon shed tears. 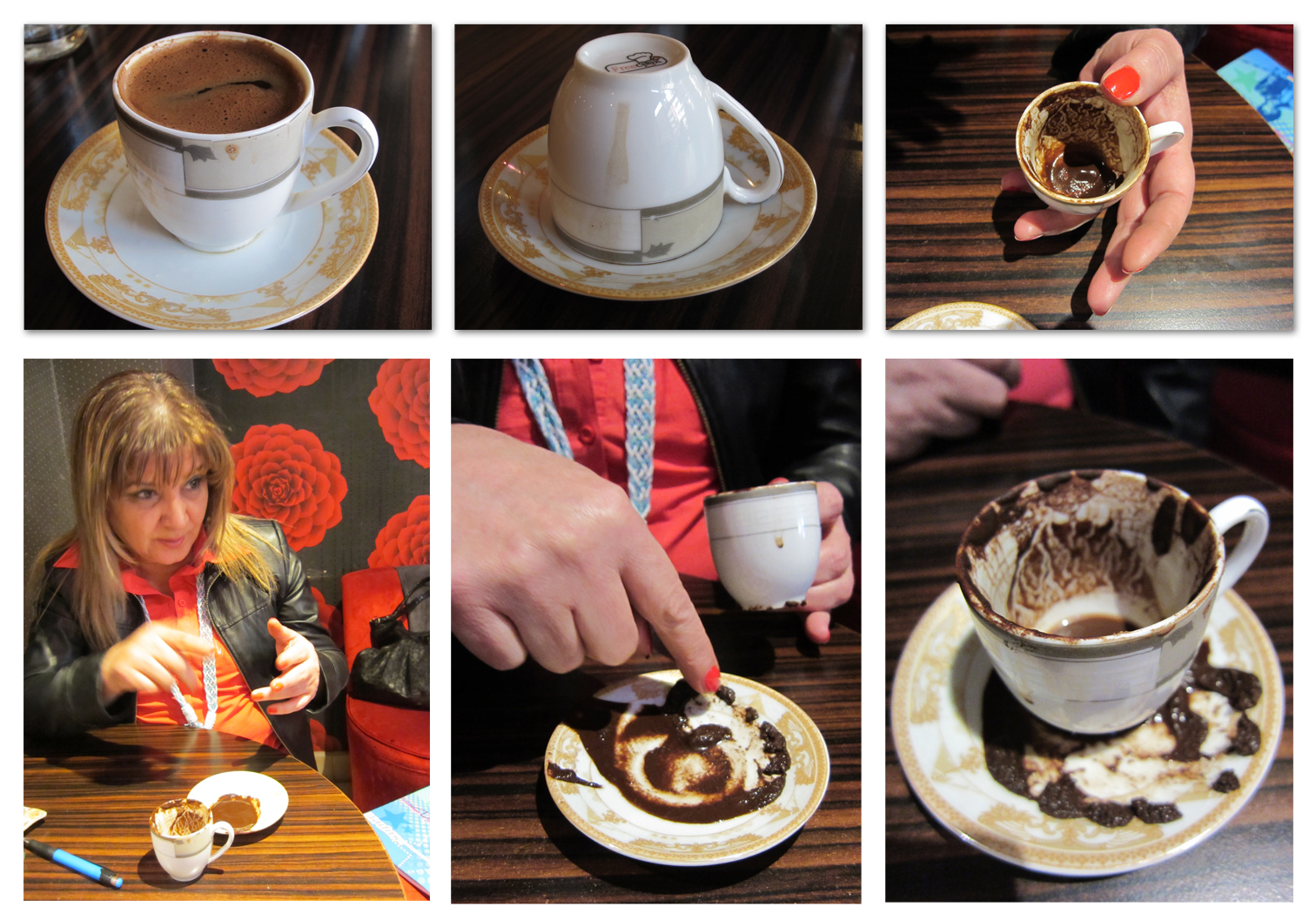 After the interpretation of the shapes within the cup, it is time to interpret the shapes in the saucer, where the majority of the coffee grounds have dripped. The saucer is generally interpreted as the home of the person whose cup is being read, and it is said to give clues about their domestic life. If there are large blank areas on the saucer where the coffee has not touched, the interpretation is a sense of relief that will be experienced in the person’s home. If however the shapes on the saucer are confused and disorderly, this is taken to mean that there will be a funeral or illness-related crowd in this person’s house. During the reading, the reader holds the saucer straight and waits for coffee grounds and coffee to flow. At the end of the reading, the saucer is flipped over once. At this stage, if a drop of coffee manages to get behind, and half way into the saucer’s radius, this is taken as a sign that the wish made will come true. Another important consideration while reading someone’s coffee cup is not to say things that will make a person too happy or too sad.
Whether it happens spontaneously after a meal, or delivered by a professional, the ritual of having one’s coffee cup read is a widespread divination practice characteristic to Turkish coffee. Today, in Turkey, the number of coffeehouses which employ professional coffee cup readers is on the increase. Hence you enjoy a fine cup of Turkish coffee, and get mystical glimpses into your future.
Prev Post Next Post
Recent articles
Great alternative for spring break, beach party gift, travel, birthday gift, bridal wrap, bridesmaid gift, winter wedding shawl or wedding favor
Tags
Flickr